﻿Boys State Attendees Departure Photos (June 8, 2014)  -- A Record 9 Boys from Bandera County
﻿Sincere thank you to our Sponsors, Parents and Teachers!!﻿
Come to the Legion at 7 pm on August 19th to hear of them share their experiences!!  ﻿ 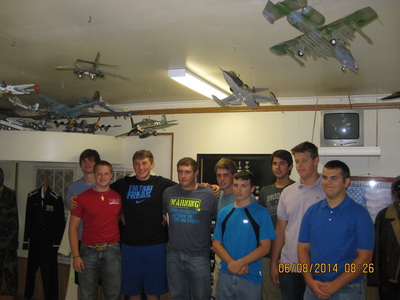 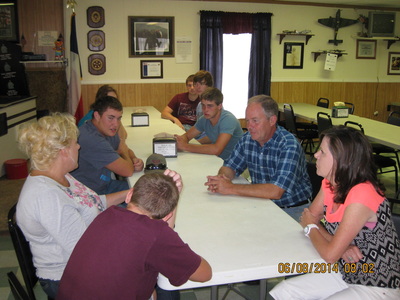 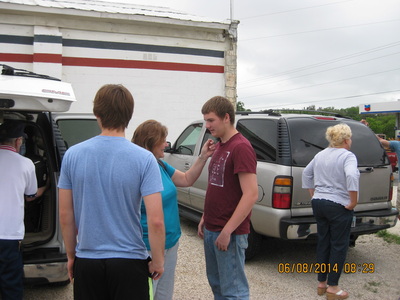 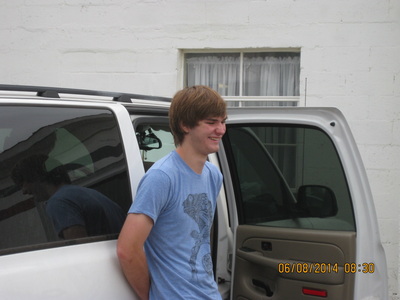 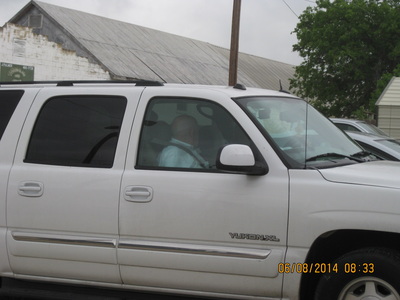 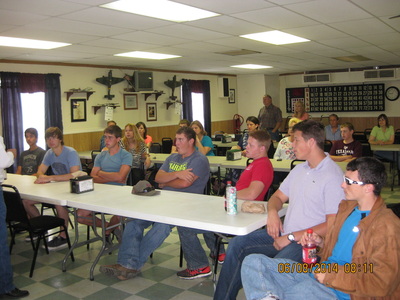 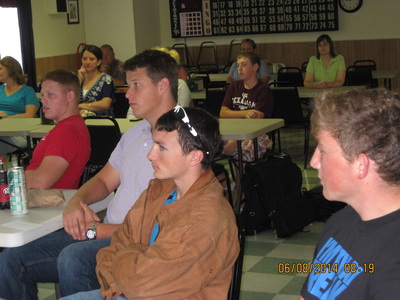 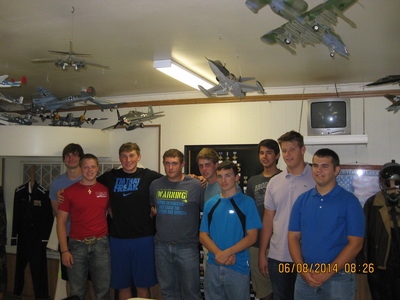 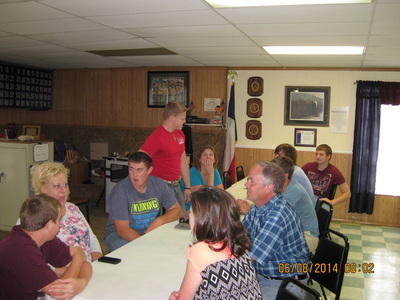 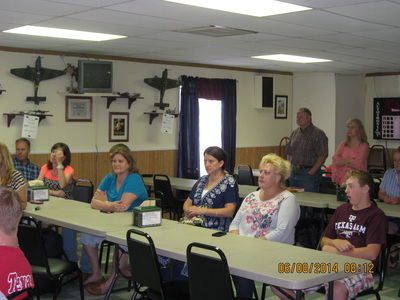 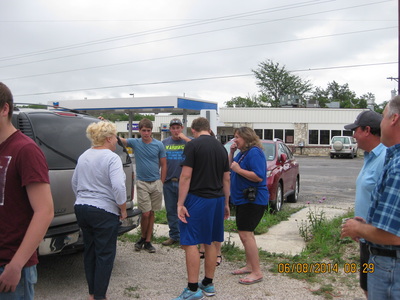 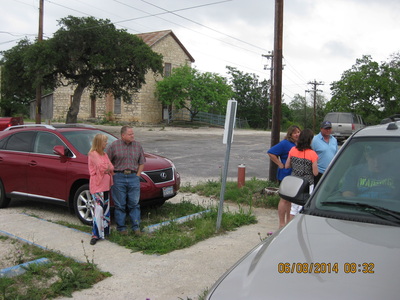 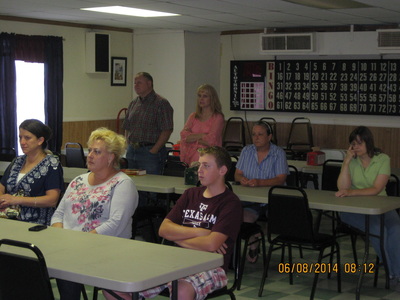 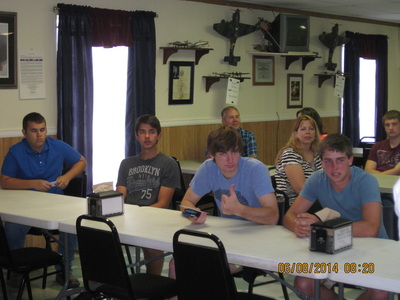 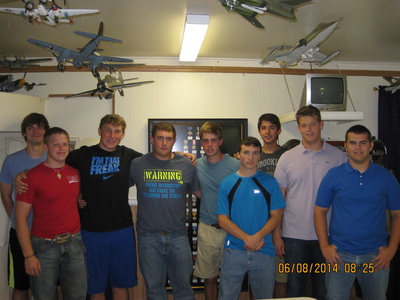 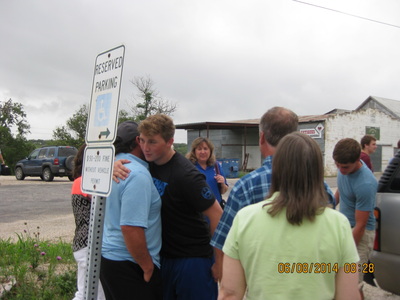 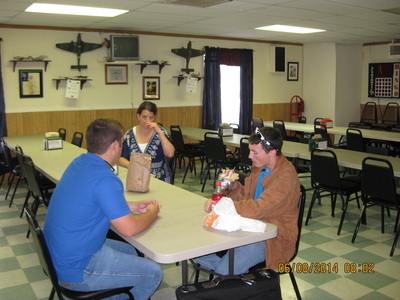 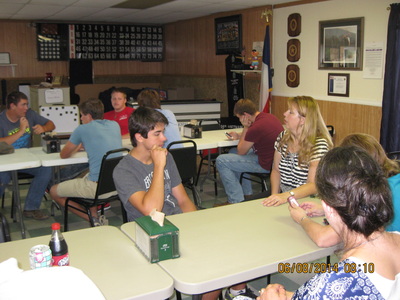 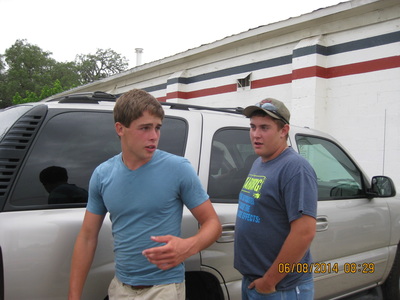 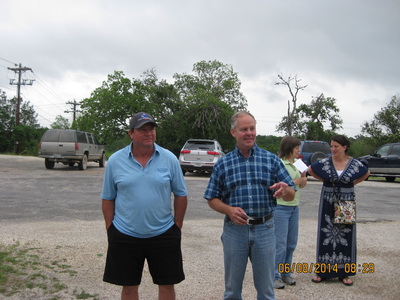 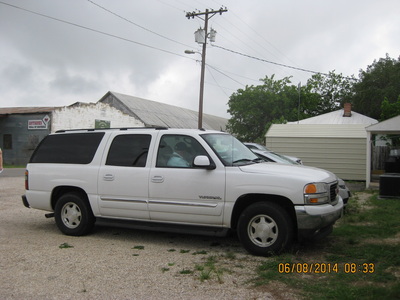 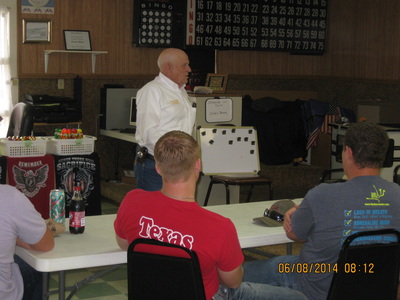 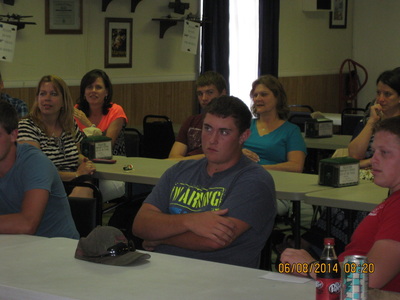 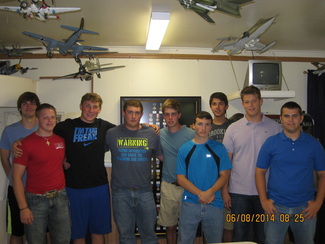 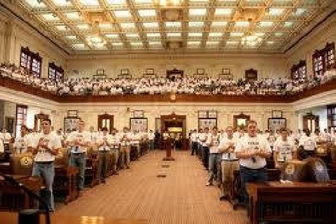 American Legion Boys State is among the most respected and selective educational programs of government instruction for high school students. It is a participatory program where each student becomes a part of the operation of his local, county, and state government.

Boys State has been a program of The American Legion since 1935, when it organized to counter the fascist-inspired Young Pioneer Camps. The program was the idea of two Illinois Legionnaires, Hayes Kennedy and Harold Card, who organized the first Boys State at the Illinois State Fairgrounds in Springfield.

At American Legion Boys State, participants are exposed to the rights and privileges, the duties and the responsibilities, of a franchised citizen. The training is objective and practical, with city, county, and state governments operated by the students elected to the various offices.

In the actual selection of Boys State citizens, merit and ability alone are the basis for selection. Boys State is not a program for underprivileged boys nor is it a summer camp for recreation. American Legion Posts or other community-minded organizations often pay fees, or "tuition," with little to no expense to the young men.

We wish to secure equal delegate representation from all areas of the State of Texas; therefore, the Department Boys State Committee asks for one or more boy(s) from each accredited high school (public or private) to be nominated by the school to attend.

To be selected for nomination or appointment as a Texas Boys State delegate, the candidate must demonstrate:


In addition, the candidate must:

Interested individuals, parents or school administrators should contact Bandera American Legion157.  School officials and the American Legion will review interested personnel to ensure they are qualified.

The application and guidance are at: http://www.texasboysstate.com/apply.php

WHY SHOULD I ATTEND?

"For admission into Texas A&M, we value leadership development in our applicants and look favorably on those who have been selected to attend the Boys State program. We view this program as one that brings together students who have exhibited strong academic potential, solid leadership skills, dedicated commitment to service, and strength in character”.   Dr. Alice Reinarz, the Assistant Provost for Enrollment at Texas A & M University.  Numerous other universities and Military Academies across the country also look for attendance at the American Legion Boys State as a significant differentiator among applicants.

All of the Military Service Academies and numerous other universities specifically look for Boys State a part of the extracurricular activities.  The leadership, character, and community engagement of Boys State are indicators of academic success as well.


WHAT WILL I DO THERE?

Citizens of Texas Boys State not only will be required to review knowledge already acquired concerning the political machinery of a state, but they will find themselves running for office as real candidates do in the everyday world. At Texas Boys State, citizens organize their own city, county and state governments, and they choose their own officials in accordance with regular election procedures. In addition, they learn the duties of the various city, county, and state officers, and they introduce and argue their own bills in a Legislature.

The entire program is non-partisan. Problems will be considered without reference to any existing political party and will be free from propaganda. The sole purpose is to enable the boy to grasp the meaning of some of the responsibilities which he will be called upon to assume when he becomes an adult. It should be distinctly understood that the selection and assignment of the boys to parties is in no way connected with the existing political parties in Texas. The “political parties” in Texas Boys State are called “Nationalists” and “Federalists.” They are purely mythical and none of the principles typifying any of the existing parties will be adopted by Texas Boys State.

Upon arrival at Boys State each citizen is assigned to one of two "fictional" political parties, which are the "Nationalists" and the "Federalists" at Texas Boys State. The entire program is non-partisan and problems considered are without reference to any existing political party and will be free from propaganda. The sole purpose is to enable the citizens of Boys State to grasp the meaning of some of the responsibilities to assume upon becoming an adult. Because of the time element and nature of the program, political party structure at Boys State, in some instances, differs from the realistic situation.

Each Boys State city has approximately 40-45 citizens and each city is as nearly balanced as possible between the two parties. All the citizens of the same political party within the city comprise a party precinct. From each two-party precinct five of its citizens are chosen as voting delegates to the political party’s County Convention with one of the five or seven serving as the Precinct Chairman and another to serve as Vice Chairman. (See the City-County-District Organization Diagram in this section.) At the County Convention five or seven voting delegates, one of whom serves as the County Chairman, are chosen to represent the county at the Statewide Party Convention where state-level party business is conducted and committees, such as the Platform Committee and Rules Committee, are designated. State Convention Delegates elect a State Party Chairman, Party Whips, and other officials they deem necessary. Although voting delegates are elected to the County and State Conventions, all other party members attend the various party level meetings. Each Boys Stater seeking a party nomination for any elected city, county, district, or state office may obtain the filing form from his city counselor at the city orientation. The completed form with the necessary signatures will be submitted with the correct change filing fee to his precinct chairman prior to the deadline listed in the details of the Election Procedure in this section of the manual. The filing fee for State Offices is $1.00, District Offices is $.50, County and City are $.25. Remember: No changes will be made nor petitions accepted after the deadline.

Each candidate will be responsible for the correct completion of his filing form. Each office (see the section of "Boys State Elected Officials" area of the website for a complete list of offices) requires endorsing signatures as follows: State Offices – 30 names; District – 12; County – 8; and House/Senate – 4. These signatures may be obtained only from party members who are residents of the political sub-division served by the office. For example: a candidate for Governor may get signatures from any Boys Stater in his party whereas a candidate for District Judge may get signatures only from party residents of his district. The petitions will be checked and violations will disqualify the candidate. Each Boys Stater may sign only as many petitions for an office as there are positions to be elected. For example: Sign only one petition for Attorney General but may sign four for County Commissioner.

Ballots will be prepared more rapidly if the candidate will use the proper identification numbers in the upper-right corner of the filing form. A space will be available for the candidate’s "Office Identification Number" and for the "Political Sub-division Number". The proper numbers can be found by referring to the sections on "Boys State Elected Officials" and the diagram of the "Boys State City County District Organization." For example: If a resident of Berry City seeks the office of District Judge, his "office number" would be 301 and his "political sub-division number" would be 40. All candidates for State Offices will use number 50 for the "political sub-division."

Each Precinct, County and State Chairman is responsible for certifying the ballots. Each should report the correctness or errors to Election Headquarters before deadline. Additions or corrections will not be made after the deadline. Each party has Party Advisors to aid in the development of the organization and to preside over the State Party Convention until a State Party Chairman is chosen by the delegates. County and District Advisors will aid the Party Advisor on their levels. Each participant should study the program schedule to keep pace with developments.

Election results are tabulated before observers by election officials under the supervision of staff members and posted as soon as possible. Official Results will be posted outside of Boys State Headquarters. Elected officials function in the positions following their inauguration and Oath of Office. (See Constitution Article VII).

Citizens seeking appointments to positions may make application with the elected officials who will administer the Oath of Office. Each citizen of Boys State should work towards the attainment of some office, either elective or appointive.

Information from the National level of the American Legion:  Legionhttp://www.legion.org/boysnation

The youth movement in the United States known as Boys State originated by the Illinois Department of The American Legion in 1934. The plan was adopted by the national organization in 1935, and has been put into operation in 48 states. Our two most recent states, Hawaii and Alaska, do not operate their own programs but do send delegates to other states. A Boys State is operated in the Panama Canal Zone and the District of Columbia. By authority of a mandate of the 1939 Department Convention held in Waco, the Americanism Committee met in Austin with Commander Lou Roberts of Borger and made plans for the first Boys State of Texas.

"This program was destined to grow in scope and value. Lee O. Smith of Beaumont headed a staff of capable, enthusiastic counselors as 108 boys registered for Lone Star Boys State in Austin, June 10, 1940. The boys, under the direction of the staff, were divided into three political parties. They elected a full complement of state, county, and city officials. Their elections were held on Tuesday and their state government functioned until the close of the meeting on Saturday, June 15. Conferences were held during the week in which counselors lectured on the Constitution and the separate branches of government. Citizenship bureaus and courts functioned and bills were drawn up and passed. The boys edited and published a daily paper, The Lone Star Stater, which became the official publication of the organization. The groups were housed in Prather Hall at The University of Texas. The climaxing affairs included the Governor’s Ball, honoring the governor of Boys State and his staff. John Robert Lee Keig, Jr. of Beaumont was elected Governor and Grady Baskin of Cameron was elected as Lieutenant Governor. The boys told the counselors at the close of the program that they had learned more about the operation of the state and municipal governments in the brief period of Boys State than at any other time in their lives."

From the beginning of Boys State described above, the Texas Boys State has grown in program and in numbers to meet the needs of the youth of Texas. The present program includes several hundred of the youth leaders of our state each year.

Participants are selected on a competitive basis by the local high schools and Legion Posts throughout the State of Texas.

The staff serving Boys State is made up of men and women of the Legion, Legislators and former Boys Staters who voluntarily give of their time and energies to this program of citizenship development. Most of these men are outstanding in the field of education, law and government who leave their busy jobs and come into Austin to serve their state and nation by helping the young leaders learn better how to perform their responsibilities of a free citizen. The staff will include many individuals serving in the capacities of counselors, junior counselors and administrative staff. Former Boys Staters are called upon to serve as junior counselors or advisors to the Boys Staters. Many have served faithfully for many years and are promoted to the senior status by the leadership team.