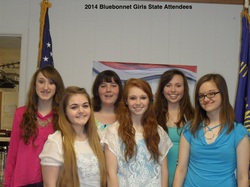 The 2014 session of Texas Bluebonnet Girls State will be held from June 15 to June 21 at Texas Lutheran University in Seguin, Texas.

American Legion Auxiliary Girls State is a nonpartisan program that teaches young women responsible citizenship and love for God and Country. Since the inception of the Girls State program in 1937, nearly one million young people have had the opportunity to learn first-hand how their state and local government works.

High school girls, who have completed their Junior year, spend an intensive week of study, working together as self-governing citizens at Auxiliary-sponsored Girls State programs in every state (with the exception of Hawaii). In most cases, expenses associated with attending this program are paid by a sponsoring American Legion Post, a local business or another community-based organization.

Participants learn how to participate in the functioning of their state's government in preparation for their future roles as responsible adult citizens. Two girls are selected from each Girls State program to attend Girls Nation, a national government training program. Girls Nation "senators" meet for a week in Washington, D.C., where they run for political office, campaign for the passage of legislation and possibly meet with state Representatives and Senators. Capping off the week of Girls Nation is oftentimes a meeting with the President of the United States at the White House.

Girls State citizens are made up of excellent high school students from across the state. Girls are selected to participate based on nominations by their own high school faculty or staff. Eligibility is limited to any girl in her junior – or third – year of any Texas senior high school whether public, private or parochial. Fundamental qualifications of all nominees are demonstrated accomplishments of leadership, citizenship and character in their schools and community. Past Girls State citizens include former Governor Ann Richards, former Comptroller Carole Keeton Strayhorn, and Judge Court of Criminal Appeals Bea Ann Smith.

Interested students and parents may contact the Bandera American Legion Auxiliary or the Bandera High School guidance counselor.  This is a competitive selection and should be initiated in January.

﻿WHY SHOULD I ATTEND?﻿

This state government education program is also conducted at a national level: Girls Nation. Girls Nation is held annually in Washington, D.C. Citizens of Texas Bluebonnet Girls State have the opportunity to select two citizens to represent Texas at the Girls Nation gathering. This is a wonderful opportunity for two outstanding citizens to attend a unique “hands on” Federal Government training session.

Some of the greatest benefits of Texas Bluebonnet Girls State are those gifts that come from forming new, life-long friendships, learning about civic responsibility, performing community service and becoming empowered young women. The empowerment that citizens gain from Texas Bluebonnet Girls State comes through community, education and achieving goals through practicing our American Democratic process.

Texas Bluebonnet Girls State is a mythical 51st state where, for one week, participants, or “citizens”, organize their own city, county, and state governments. They elect their own officials, learn the duties of the various city, county and state offices. Citizens introduce and debate their own bills in a mock legislature. The program concludes with a visit to the State Capitol building in Austin where the citizens are given an opportunity to sight-see and meet state officials.

The Girl’s State schedule is active: throughout the day citizens will attend educational assemblies and lectures, they will have time to write bills, prepare debate, meet with their cities, and file for office, many days will end by electing officials. Citizens will also be present at flag raising and lowering.

Upon their arrival at Girls State, citizens are divided into “cities”, “parties”, and legislative chambers. In their cities they elect officials such as a mayor, treasurer and city commissioners. Citizens also learn about government procedures on a county and then state level. The political “parties”, the National and the Federal, do not reflect the two major political parties in today’s system, but allow citizens to gain special knowledge and insight into how government works. Citizens are also placed into legislative chambers, the Senate and the House of Representatives, where they introduce, debate, and vote on bills. The session culminates in an election for governor during which campaigns are waged, speeches prepared and presented, ballots cast and votes counted.

During the session, citizens will have the privilege of hearing many outstanding government speakers. Past speakers have included then Governor George W. Bush, former Presidents George Bush and Lyndon Baines Johnson, First Lady Mrs. Lyndon B. Johnson and Miss Barbara Jordan.

More details are located at:  www.boysandgirlsstat.org/girls

Additional information for parents is at: http://girls-state.org/wordpress/?page_id=52

·         educate our youth in the duties, privileges and responsibilities of American citizenship

·         give future citizens, in a realistic manner, an opportunity to learn the problems of government by performing the same duties as real office holders in the everyday world

·         inform them of the rights and privileges of American citizenship

The Girls State program in Texas has been one of constant improvement and growth. The number of participants has grown from 94 to over 500. The progress of Girls State in Texas could not have been accomplished if it had not been for the pioneers of Bluebonnet Girls State; the full cooperation and encouragement of the Department Presidents of the American Legion Auxiliary; former directors, members and chairmen of the Girls State Committe; the press, radio and television; school and state officials; interested individuals; most of all the local units who sponsor girls; and last but not least, the citizens.

One of Girls State’s most influential pioneers was Frances Goff who began working with Girls State in 1947. She used her considerable experience in state government to shape the program as Director from 1952 until 1994.

The Girls State Committee is the policy-making body of Girls State. The four members are appointed by the President of the American Legion Auxiliary from its membership. The Department President and the committee select the Director who is responsible for the administration of the policies set forth by the committee. Girls State requires an operating budget of approximately $200,000. Counselors and staff members are unpaid volunteers.