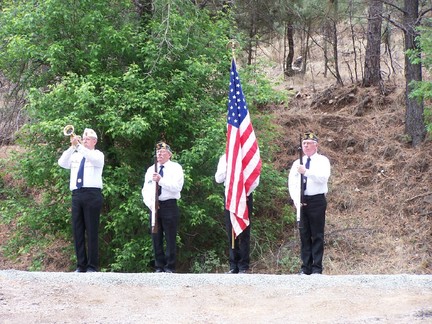 In 2000, Congress legislated that, upon request of the next of kin, all eligible veterans must receive military funeral honors when they pass on.  At a minimum, the funeral honors will consist of a two-person uniformed military detail, with at least one member representing the service branch of the deceased.

The legislation also encourages veterans service organizations, including the American Legion, to augment the honors detail as an authorized provider with pallbearers, firing party, bugler and color guard.

The American Legion has performed tens of thousands of burial ceremonies for veterans’ families throughout its history; this will not change.  As a result, the Legion has adopted certain ways and means that may differ from other groups.  This does not mean they are wrong or improper ---- just different.

Department of Defense (DoD) guidance is followed in rendering military funeral honors. When requested by the next of kin, the ceremonial paying of respect and gratitude to those who have faithfully defended our nation must include the following;

·        Ceremonial folding and presentation of the U.S. flag (always presented by the uniformed detail leader)

It is the sacred obligation of all Americans to honor our deceased veterans by performing these time-honored duties in the best tradition of the deceased veteran’s service.  The American Legion helps fulfill that obligation by supplementing the effort of the military service.

For veterans families to request funeral honors, please contact the Bandera Legion at (830) 796-7528 for more
information.  Membership in the American Legion is not required. 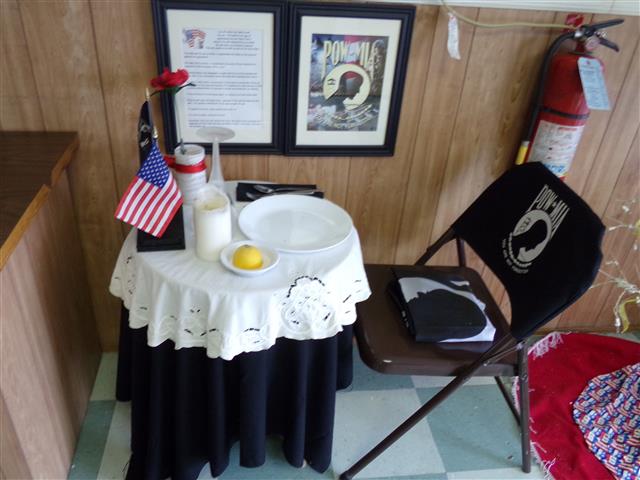 At the front door of the Bandera American Legion Post --- before monthly meetings, at community and holiday events, and memorials, we call attention to Americans still unaccounted for from WWII, the Korean War, the Vietnam War and other conflicts. This physical symbol of POW/MIA's and the cause for which we stand -- their return or full accounting. A detailed explanation is provided below.
﻿﻿FALLEN AND MISSING COMRADES﻿﻿

You may notice this small table as you enter the Bandera American Legion ---  in a place of honor. It is set for one.

Those who have served and those currently serving the uniformed services of the United States are ever mindful that the price of enduring peace and freedom comes at the highest prices of personal sacrifice.

This table symbolizes our fallen and missing comrades. They are commonly called P.O.W.'s or M.I.A.'s, we call them brothers and sisters.  They are unable to be with us this evening and so we remember them.

This table set for one is small... it symbolizes the frailty of one prisoner against his oppressors.

The table cloth is white... it symbolizes the purity of their intentions to respond to their country's call to arms.

The single red rose signifies the blood many have shed in sacrifice to ensure the freedom of the United States of America.

The yellow ribbon represents all those who demand a proper accounting of our missing comrades.

A slice of lemon is on the bread plate... to remind us of their bitter fate.

There is salt upon the bread plate... symbolic of the family's tears as they wait.

The glass is inverted... they cannot toast with us tonight. The chair is empty... they are not here.

The candle is the light of hope that lives in our hearts to illuminate their way home, away from their captors, to the open arms of a grateful nation.

Remember... all of you who served with them and called them comrades, who depended on their might and aid, and relied on them... for surely... they have not forsaken you.

You are not forgotten as long as there is one left in whom your memory remains!