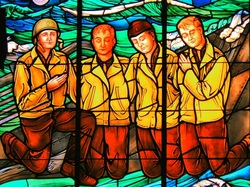 The American Legion Chaplain need not be a member of the clergy, but must be a person capable of moral and intellectual leadership and one who gives dignity and respect to the office.  The leadership in many post activities belongs by right to the chaplain and can greatly increase the Post's usefulness to the community.
The Chaplain has a significant role in the conduct of meetings, the observance of patriotic occasions, funeral services and dedication ceremonies.  Visiting members/veterans and their families is another important role in expanding the Legion's service to them.
The content of this section may include poetry, articles for contemplation, and feedback from our website audience.  Your input is welcomed at the "FEEDBACK" button on the home page.
Table of Contents
1 - A Different Christmas Poem
2 - Special Video -- Paying It Forward
3 - A Poem Worth Reading
4 - In Flanders' Fields
A DIFFERENT CHRISTMAS POEM

The embers glowed softly, and in their dim light, I gazed round the room and I cherished the sight.
My wife was asleep, her head on my chest, My daughter beside me, angelic in rest.
Outside the snow fell, a blanket of white, Transforming the yard to a winter delight.

The sparkling lights in the tree I believe, Completed the magic that was Christmas Eve.
My eyelids were heavy, my breathing was deep, Secure and surrounded by love I would sleep.
In perfect contentment, or so it would seem, So I slumbered, perhaps I started to dream.

The sound wasn't loud, and it wasn't too near, But I opened my eyes when it tickled my ear.
Perhaps just a cough, I didn't quite know, Then the sure sound of footsteps outside in the snow.
My soul gave a tremble, I struggled to hear, And I crept to the door just to see who was near.

Standing out in the cold and the dark of the night, A lone figure stood, his face weary and tight.
A soldier, I puzzled, some twenty years old, Perhaps a Marine, huddled here in the cold.
Alone in the dark, he looked up and smiled, Standing watch over me, and my wife and my child.

"What are you doing?" I asked without fear, "Come in this moment, it's freezing out here!
Put down your pack, brush the snow from your sleeve, You should be at home on a cold Christmas Eve!"
For barely a moment I saw his eyes shift, Away from the cold and the snow blown in drifts..

To the window that danced with a warm fire's light Then he sighed and he said "Its really all right,
I'm out here by choice. I'm here every night." It's my duty to stand at the front of the line,
That separates you from the darkest of times.

No one had to ask or beg or implore me, I'm proud to stand here like my fathers before me.
My Gramps died at 'Pearl on a day in December," Then he sighed, "That's a Christmas 'Gram always remembers."
My dad stood his watch in the jungles of 'Nam', And now it is my turn and so, here I am.

I've not seen my own son in more than a while, But my wife sends me pictures, he's sure got her smile.
Then he bent and he carefully pulled from his bag, The red, white, and blue... an American flag.
I can live through the cold and the being alone, Away from my family, my house and my home.

I can stand at my post through the rain and the sleet, I can sleep in a foxhole with little to eat.
I can carry the weight of killing another, Or lay down my life with my sister and brother..
Who stand at the front against any and all, To ensure for all time that this flag will not fall."

"So go back inside," he said, "harbor no fright, Your family is waiting and I'll be all right."

"But isn't there something I can do, at the least, "Give you money," I asked, "or prepare you a feast?
It seems all too little for all that you've done, For being away from your wife and your son."

Then his eye welled a tear that held no regret, "Just tell us you love us, and never forget.
To fight for our rights back at home while we're gone, To stand your own watch, no matter how long.
For when we come home, either standing or dead, To know you remember we fought and we bled.
Is payment enough, and with that we will trust, That we mattered to you as you mattered to us."

A Special Video:  Paying It Forward !!!
Click on the Forward Arrow
﻿A POEM WORTH READING﻿

He was getting old and paunchy
And his hair was falling fast,
And he sat around the Legion,
Telling stories of the past.

Of a war that he once fought in
And the deeds that he had done,
In his exploits with his buddies;
They were heroes, every one.

And 'tho sometimes to his neighbours
His tales became a joke,
All his buddies listened quietly
For they knew where of he spoke.

But we'll hear his tales no longer,
For ol' Joe has passed away,
And the world's a little poorer
For a Veteran died today.

He won't be mourned by many,
Just his children and his wife.
For he lived an ordinary,
Very quiet sort of life.

He held a job and raised a family,
Going quietly on his way;
And the world won't note his passing,
'Tho a Veteran died today.

When politicians leave this earth,
Their bodies lie in state,
While thousands note their passing,
And proclaim that they were great.

Papers tell of their life stories
From the time that they were young,
But the passing of a Veteran
Goes unnoticed, and unsung.

Is the greatest contribution
To the welfare of our land,
Some jerk who breaks his promise
And cons his fellow man?

Or the ordinary fellow
Who in times of war and strife,
Goes off to serve his country
And offers up his life?

The politician's stipend
And the style in which he lives,
Are often disproportionate,
To the service that he gives.

While the ordinary Veteran,
Who offered up his all,
Is paid off with a medal
And perhaps a pension, small.

It is not the politicians
With their compromise and ploys,
Who won for us the freedom
That our country now enjoys.

Should you find yourself in danger,
With your enemies at hand,
Would you really want some cop-out,
With his ever-waffling stand?

Or would you want a Veteran
His home, his country, his kin,
Just a common Veteran,
Who would fight until the end.

He was just a common Veteran,
And his ranks are growing thin,
But his presence should remind us
We may need his likes again.

For when countries are in conflict,
We find the Veteran's part,
Is to clean up all the troubles
That the politicians start.

If we cannot do him honour
While he's here to hear the praise,
Then at least let's give him homage
At the ending of his days.

Perhaps just a simple headline
In the paper that might say:
"OUR COUNTRY IS IN MOURNING,
A VETERAN DIED TODAY."

IN FLANDERS' FIELDS the poppies blow
Between the crosses, row on row,
That mark our place; and in the sky
The larks, still bravely singing, fly
Scarce heard amid the guns below.

We are the Dead.  Short days ago
We lived, felt dawn, saw sunset glow,
Loved and were loved, and now we lie
In Flanders fields.

Take up our quarrel with the foe:
To you from failing hands we throw
The torch; be yours to hold it high.
If ye break faith with us who die
We shall not sleep, though poppies grow
In Flanders fields.
By  Lt. Col. John McCrae, 1915